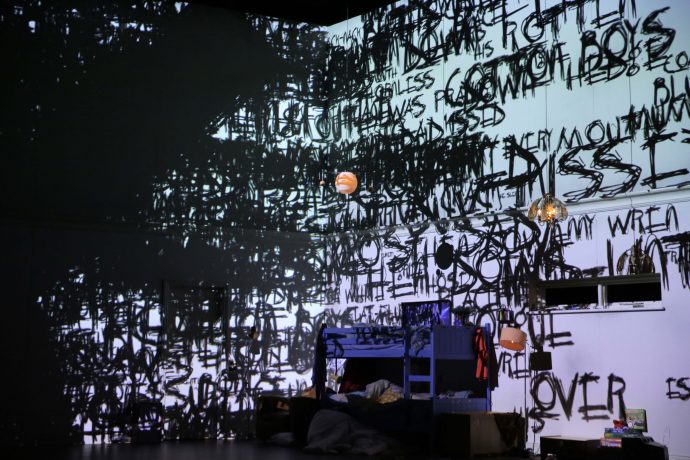 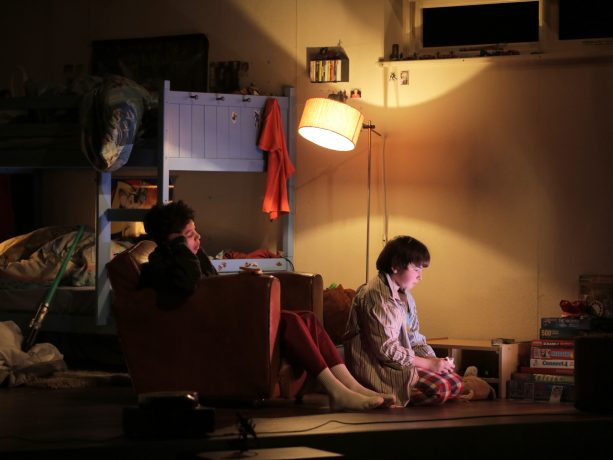 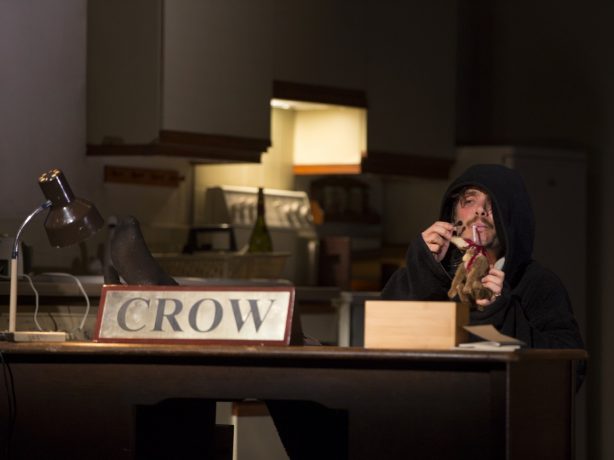 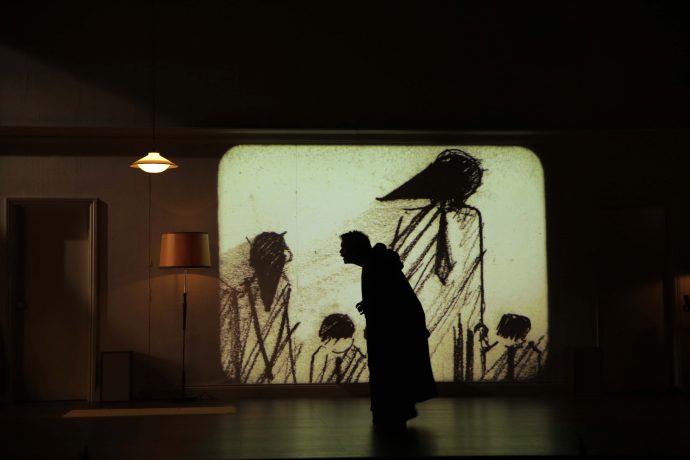 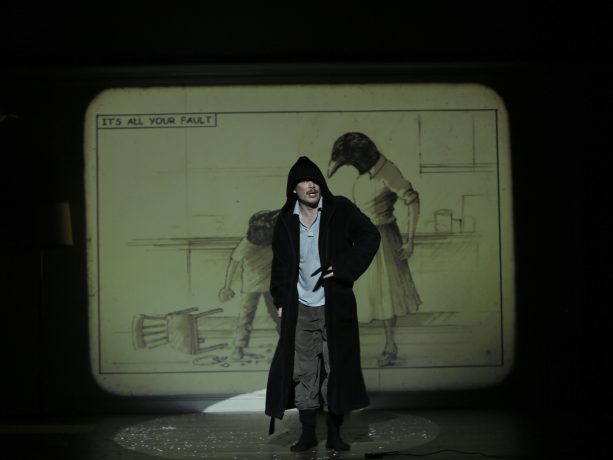 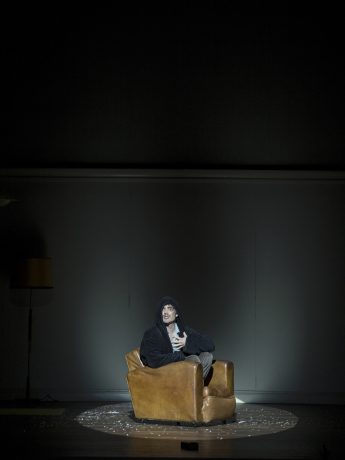 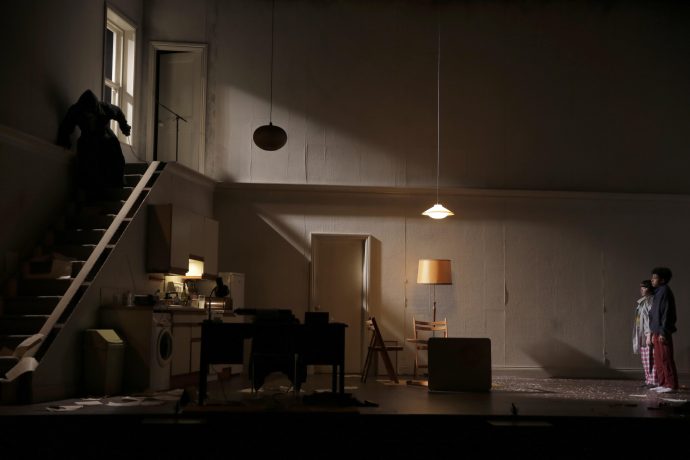 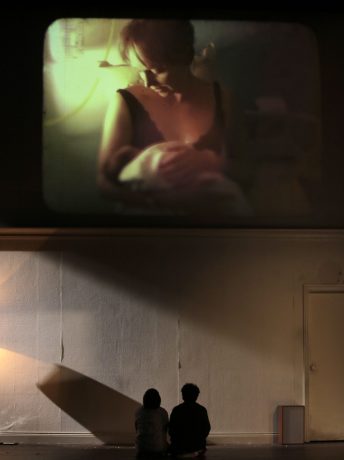 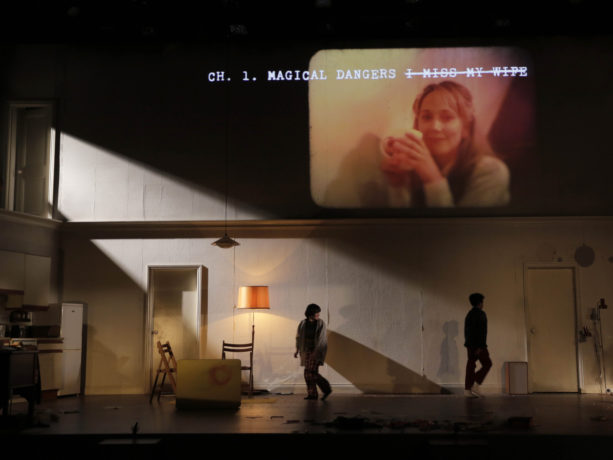 Grief is the Thing with Feathers (2018)
“The sparse set design gives the characters ample room to destroy the stage as they battle through their varying stages of grief. Crow and the father look straight at the audience frequently, the gaze of Crow being one you want to avert, while that of the grieving father prompts compassion.....a heart-wrenching insight into the impact of grief on children comes with their scroll through famous women on television who could perhaps replace their mother. They move on, as resilient children do, at one point remarking that they hope that, wherever she is, their mother likes them....this is a production that will remain with you long after the curtain call.”
Times  ★★★★★
“Indeed, if walls could talk they’d say do not miss “Grief is the Thing with Feathers,” for it is, without question, one the theatrical events of the year...................Set designer, Jamie Vartan juxtaposes a vast cold expanse, created from sheer size and scale, with small pockets of warmer family spaces, capturing both the cramped confines, and overwhelming void, both Boys and Dad inhabit without ever sacrificing immediacy and intimacy......Projection designer, Will Duke, invests the insurmountable, towering walls with living presences of pain, madness, and memory, as well as a superb series of crow images by Vartan, evoking Leonard Baskin’s drawings for Ted Hughes’s original Crow collection. . With “Grief is the Thing with Feathers,” Walsh has taken the award winning, debut novella of 2015 and turned it into one of the theatrical events of 2018. It doesn’t get much better than this.”
Arts Review  ★★★★★
“Walsh's concept forces a tide of rage on the audience, with passages and sentiments from the protagonist's half-finished study of the poet Ted Hughes (his obsession), as well as the sensations of his mentor/alter ego, Crow, scratched in giant lettering in video form in Jamie Vartan's extraordinary grief-pounding set, and highlighted by Teho Teardo's magically dissonant music score. It's an overwhelming assault on the senses, recognisable to anyone who has experienced seemingly unbearable grief, and forcing those who have not to contemplate its fearful depths.......
for all its firecracker theatricality, this show is the closest approximation I can think of to the actual experience of reading a novel. It represents on stage the expansive and capricious function of the reader's imagination....
Produced by Complicité and Wayward Productions, in association with Landmark Productions and the Galway International Arts Festival, this play represents a new way of putting a novel on stage, geared at an audience that is at home with technology. It is a show that pecks at grief with a carnivorous and merciless purpose, but in a thrilling and innovative way.
”
Irish Independent  ★★★★★
“Jamie Vartan's set design, a sparsely furnished London flat, is littered with doors. However, Dad never gets to escape ; he remains ensnared in the interior spaces that Walsh's theatre navigates so well.....ultimately the power of Porter's original story is bettered by its theatrical rendering. Throughout the production, an aching odyssey of words is violently scratched and hurled bullet-like onto the fluid surface of this family home. Porter's words, far from being upstaged by the liveness of the piece, are imbibed by the production, adding a sentience and vitality to the space.”
Irish Times  ★★★★